I do hope you all had a wonderful Christmas as we did... filled with family... one of my own & hers... my sibling - sister & her some of hers plus our Mum/Nanna... then visits from another daughter & hers yesterday... now all have gone back to their respective homes...
And we are on our own... well just for today anyway...

I thought I would show you this again... a decoration my Mum made, like some 25 years ago we were working out... ohh how time flies when your living life...
Each winter my Mum & Dad would go up the coast to a very popular holiday area called Hervey Bay [pronounced Harvey Bay... much to the Mexicans amusement]... They would camp up there in their caravan for 3 months & they used to just love it.
The further north you went the warmer the winters were... not to forget the winter whiting would be biting so well at this time, too.
The Mexicans [people from down south & over the border, usually Victoria] would come up there, for a warmer winter so they all become great friends... the men off fishing & the women folk doing craft... mostly crochet. This was a few years before the Grey Nomads, got their signature name, I'd say, as they were all retired folk, out to enjoy a cheaper holiday & meeting new people, plus of course the weather.
So this is from one of those many holidays... Now it was in the times when a six pack of cans - drink cans [be it soft drink or beer] used to come with the plastic rings around them to hold them all together, so you could pick the whole six pack up in one go... a throw away plastic waste product... 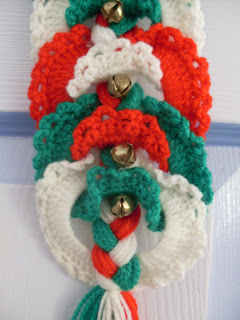 With these plastic rings, the girls could cut 4 good full rings... which they crocheted around in the [60 treble/double crochet ]... then a row of 3 chain, single crochet into top of each second treble [30 ch loops]... easy peasey so far... Now you need 9 rings - three green, three red & three white. Single crochet around a small childs hard plastic bangle, this would make the hanger/handle. 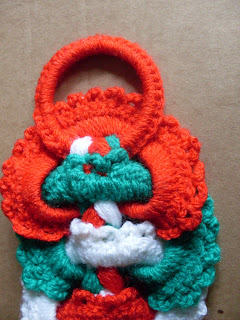 From this hanger they would plait a 'rope' to hold the crocheted plastic rings which were hung in order of red, green then white. 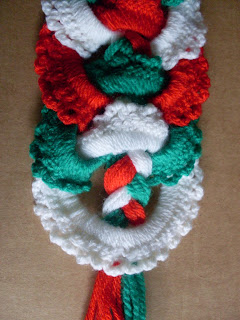 Leaving the tail of the plait hanging at the bottom. 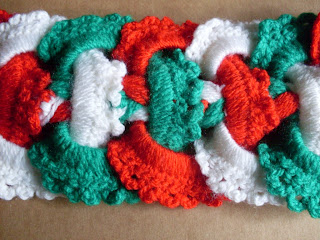 The rings were slip stitched in place & slightly turned up in the front where they would sew a bell in place.
Such a shame you can't get these plastic rings any longer as they were just the right weight to crochet around then turn up the edge but one day, we'll find something else to use, I'm sure... maybe you know of something we could substitute for it...
Yep they did the re-cycle long before it was to became so 'in'. 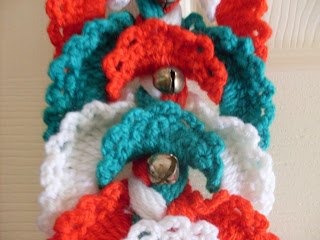 I think with all these photos you will get the drift of how it was made... each member of the family got one to keep & treasure... I love Christmas decorations with a special meaning or a story to them... don't you?
Angel Messages...
Instead of considering a matter from your single viewpoint,
try to observe it from the perspective of others.
Instead of worrying only about your own interests,
consider the well-being of the whole.
Posted by Bethel of Bethania at 4:01 pm

Wow, this is cool. I love the history behind it too. 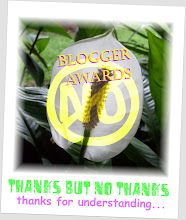